September 16, 2010, Bogota. A long line is waiting outside the main auditorium of National University of Colombia, the mythical Leon de Greiff, a temple with only 1619 chairs but the misterious power of making the audience feel like the very same representation of everyone in this world or at least of majorities. The reason is the anouncement of a lecture by this famous activist and cultural icon of the seventies, still committed with race and gender issues, nowadays devoted to the prison's abolishment cause. Her name is Angela Davis, and the first images that anyone can find about her are the typical high contrast pictures of the young black female with her powerful afro hairstyle. She's been invited by the local Gender Studies Center, along with her colleague Gina Dent, to the opening of a new class of their master's program; a week full of tributes, adulation, press conferences and lectures.
Feminist, black and LGBT activists, students and intelectuals fed that crowd that soon took the whole stock of translation receivers and fitted the auditorium's capacity while, because the current safety rules of this place, hundreds remained outside the event. Merchandising of the character that we were expecting for, fliers by a militant group that invited us to hate that myth, that bitchy traitor that is not so pure as their passion has defined purity; a videoclip repeated till the cows come home and finally the star came to stage. A passionate round of applause received the idol as usual in this place (some months before a CERN's spokesman went there to talk about the Large Hadron Collider experiment and was received as a soccer hero, a champion, Ye old white bearded man that defeated those evil quarks by himself; applause is the local favorite sport). A local famous blogger and author acted as conductor and introduced the Human Sciences Faculty's Dean, the only one male on the stage, with his sober and brief speech about the guest. Then, when the Genders Studies Center's Director started to talk, a sound like broken wood interrupted her and a detachment of face-covered militants entered to the scenary received by a confusing mix of slogans, applauses (as usual) and rejection shouts. Some members of university's security crew surrounded the star and, after a short talk, the organizers accepted the performance that those unexpected guests had prepared. 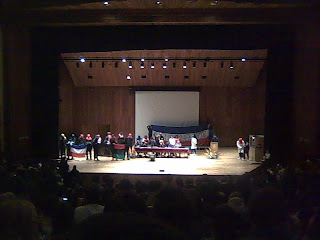 Flags, slogans, a flower for the lady and a speech that the translator didn't understand: this cliché ode to her, the one that inspired them (at least since the previous morning), metaphores, more sickly metaphores and suddenly the crowd demanded a woman to the microphone. This misterious sect, the superlative of pluralism and ecumenical intermingle of symbols and speeches (in the same flier the flag of a populist guerrilla that signed peace with government 20 years ago, a black panter movement's logo and an anarchist symbol), the kind of ideological mumbo jumbo and colorful happening that inspires the tropical clichés of local television soap opera's and french film festival's organizer's fantasies about the rebel South America and its traditional student activists. Of course they accepted that a female representative improvised a speech. More gibberish and the public correcting her for not using the 'gender inclusive language', a posmodernist and esoterical campaign based on this forced syllogism: because language reflects social reality, to change language changes reality. So there's not a word for "all" that includes male and female human beings because it would invisibilize gender, you're obligated to say all (male) and all (female). Later she drove the audience crazy when she stated "we think that man and woman are each other's complement", reminding everyone the hilarious response by a Miss Colombia's contestant.
The Robing Hoods left the place and finally the lecture started. The translator started her contribution to laugh when Davis praised dean's generosity and she translated 'performance' (it reminds me a French Alliance's event when a translator interpreted "black panters movement" as "black painters movement") and made the night a real cathartic experience.
Being honest it was more a speech than a lecture, a speech without rage but with serious conviction, I liked it. I already knew those analysis on race biased prison policy in United States and the Prison Industrial Complex, I even knew about the connections of these policies and colombian penitentiary policy, but we, that have celebrated that in last years many mainstream oficialist politicians have experienced arrest and criminal prosecution, cannot honestly applause her claim for prison's abolition. She knows that, so when she took the microphone again, after questions, she reinforced her point with some reflections on the multiplier role that prison plays in crime and some more moral arguments. A final statement of solidarity with a local professor under arrest and we left this temple of applause and passion,with many questions around our astonished heads.